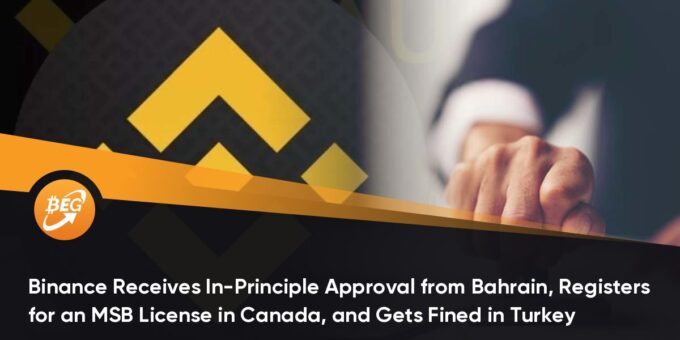 Binance Receives In-Principle Approval from Bahrain, Registers for an MSB License in Canada, and Gets Fined in Turkey

The leading exchange is yet to complete a full application process, but Bahrain central bank said licensing is just “a matter of formalities” and touted the kingdom as “the perfect place” for Binance to set up its headquarters in the region.

Binance Holdings has received in-principle approval from Bahrain’s central bank to be a crypt service provider in the kingdom, announced the leading cryptocurrency exchange on Monday.

The exchange still needs to complete a full application process which would be completed “in due course,” CEO Changepeng Zhao told Bloomberg.

This move, which is as part of Binance’s plans to become a fully-regulated centralized cryptocurrency exchange, if successful, would mark the first regulatory approval for a Binance entity within the Middle East or North Africa.

The licensing, however, is “a matter of formalities” once Binance completes the establishment requirements, said Abdulla Haji, director for licensing at the country’s central bank, who touted Bahrain as “the perfect place” for the exchange to set up its headquarters in the region.

“I am grateful for the support from the Central Bank of Bahrain and the broader Bahraini ecosystem during the process,” Zhao said.

Bahrain’s monetary authority granted a license to CoinMENA earlier this year, while Rain Financial was the first licensed crypto platform in the region when it secured approval to operate in 2019.

Binance’s entity in Canada has also registered for an MSB license that covers foreign exchange dealing, money transferring and dealing in virtual currencies.

The fine imposed was the first of its kind after the authority took on the responsibility to oversee crypto asset service providers in May, reported the state-owned news agency Anadolu on the weekend without elaborating on the violations or inspections.

While the exchange hasn’t commented anything on this fine, it released a FAQ on “Why Binance Embraces Regulations,” last week in which CEO Zhao said that regulation isn’t bad for crypto rather, “good regulations will be good for crypto.”

Good regulations, according to CZ, would protect consumers and at the same time encourage innovation which is essential for the growth of the industry.

In the article, CZ said Binance wants regulations for a number of reasons, including mass adoption and better integration with banks.

“We hope by working closely with regulators, we can help to bring regulations that protects consumers and attracts innovation.”

Last week also came the reports that Turkey’s President Recep Tayyip Erdogan will be sending the crypto law to the country’s parliament.

“The law is ready; we will send it to the Parliament soon without delay,” Erdogan told journalists in Istanbul.

Bitcoin and cryptocurrencies have been gaining increasing popularity in the country amidst the soaring inflation and its fiat currency, Turkey Lira (TRY), hitting record lows against the USD.

The depreciation in the value of the lira sent Bitcoin prices to reach a new all-time high against the fiat currency. The BTC/TRY reached just past 851,000 on Dec. 20 but since then has fallen to just under 520,000. As of writing, BTC/TRY is trading at 586,410.

This has been despite Turkey’s central bank stating back in April that it was banning the use of crypto for payments. But holding crypto remained legal in the country. Its central bank Governor Şahap Kavcıoğlu said at the time that the country’s Treasury and Finance Ministry was developing cryptocurrency regulations but had no intention to prohibit them.