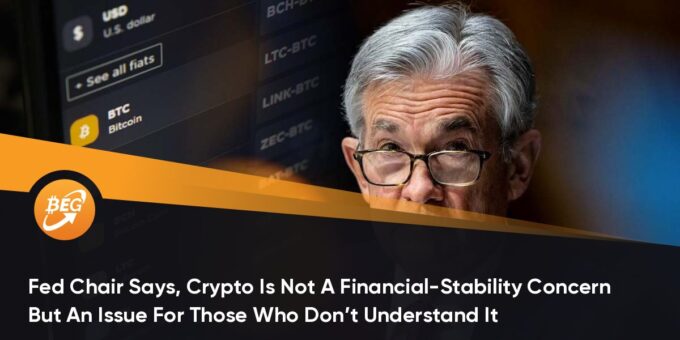 Fed Chair Says, Crypto Is Not A Financial-Stability Concern But An Issue For Those Who Don’t Understand It

On Wednesday, the Federal Reserve announced that it was doubling the pace of its bond-buying tapering and forecasted three rate hikes in 2022.

Following the end of the central bank’s two-day policy meeting, in a news conference, Fed Chair Jerome Powell also commented on cryptocurrencies, saying he doesn’t view them as a “financial stability concern.”

“I don’t see (crypto) as a financial-stability concern at the moment,” said Powell.

However, the central bank chief does see crypto as “really speculative assets.” Previously, Powell has said that he is not in favor of banning crypto the way China has.

“I do think (crypto assets) are risky, (as) they’re not backed by anything. And I think there’s a big consumer issue for consumers who may or may not understand what they’re getting.”

When it comes to stablecoins, Powell said they “can certainly be a useful” part of the financial system but only if they are properly regulated and “right now they aren’t.”

“And they have the potential to scale particularly if they were to be associated with one of the very large tech networks that exist.”

He also supports the President’s Working Group’s report on the fiat-backed digital assets. The report published last month has called on Congress to pass new legislation so that stablecoins can be subject to “appropriate federal oversight” and to limit the issuance of stablecoins by only insured banks.

“You could have a payment network that was immediately systemically important that didn’t have appropriate regulation and protections. The public relies on the government and the Fed, in particular, to make sure that the payment system is safe and reliable.”