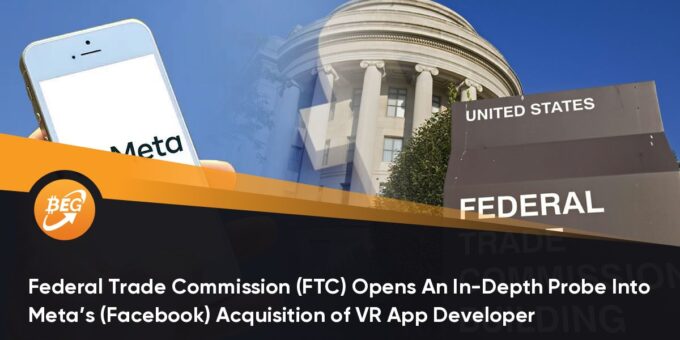 The Federal Trade Commission (FTC) of the US has started an in-depth probe into Meta Platform’s (previously Facebook) $400 million acquisition of Supernatural, a virtual reality (VR) fitness app.

Now, the deal won’t be finalized for another year following FTC’s probe that started shortly after Thanksgiving Day last month, news portal The Information reported on Thursday, citing two people with knowledge of the situation.

Back in late October, Facebook announced its rebranding, which it said would be more in line with its plans of becoming a metaverse company. At the time, CEO Mark Zuckerberg said that this new platform would “touch every product we build” and would support “crypto and NFT projects.”

Meta has invested heavily in virtual and augmented reality and is working on AR glasses and wristband technologies.

The company’s Oculus VR headsets are also a vital step towards metaverse. These headsets allow people to interact in this “more immersive” digital reality.

This year, Oculus has sold more headsets than Microsoft did Xboxs.

This marks the beginning of ARVR’s predominance.

A thread on ARVRs growth, use-cases, and future below: pic.twitter.com/tQVlWMerp6

Besides building hardware Oculus, Meta has acquired at least six companies that make some of the most popular games and other apps for the headsets, a move to dominate the space and slow down its completion. The developer of Supernatural is one of them, which has become a breakout hit.

According to Meta, acquiring these apps allows them to pour funds into them and create better VR experiences. While other acquisitions went without a hitch, the FTC has now initiated a probe into the latest one.

As per the report, this probe appears to be a part of FTC Chair Lina Khan’s mission to make sure technology giants are not shutting out the next generation of competitors in emerging computing platforms.