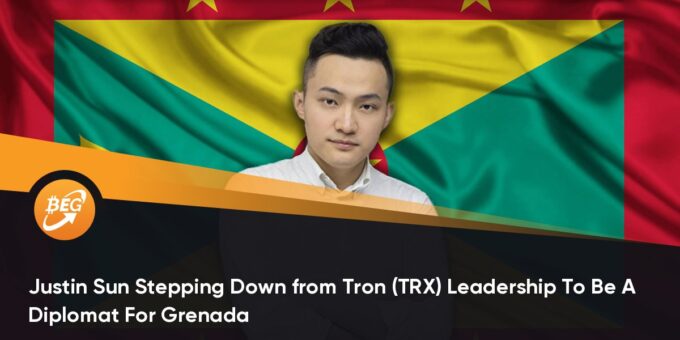 Tron founder Justin Sun has announced his exit from the project to focus on crypto legitimization in Latin American countries starting with Grenada, where he will be the government’s ambassador to the World Trade Organization (WTO).

“I’m not retiring from TRON, but rather stepping down from an active involvement to serve as leader and supporter role now that the TRON network has been truly decentralized,” said Sun on Twitter.

Sun further said that he will still engage with the TRON community and continue pushing for its advancement.

🎉🎉🎉Congratulations @HEJustinSun on his appointment as Ambassador, Permanent Representative of Grenada to the World Trade Organization. @WTO #WTO

Sun is now embarking on a new career as a diplomat for the Caribbean nation of Grenada, where he has been a resident since 2019.

On his separate Twitter account bearing the salutation “His Excellency,” Sun wrote that he had accepted the Grenadian government invitation to serve as the permanent representative of the country to the World Trade Organization in Geneva.

“I will be working in full capacity to represent Grenada’s national interests, to the WTO,” Sun added.

Last year, Sun won a dinner with billionaire investor Warren Buffett and this year was outbid at the very last moment at an auction for Beeple’s NFT that was sold for $69 million.

In an interview with Bloomberg, Sun said that the $2.3 trillion cryptocurrency industry has reached a stage now that “we really need sovereign states and regulators and international organizations to recognize the potential and the benefits of blockchain technology.”

As such, he will now focus his efforts on helping developing countries and developed states recognize the importance of blockchain technology and cryptocurrency.

“I will also try to promote new technology development in Grenada,” Sun said.