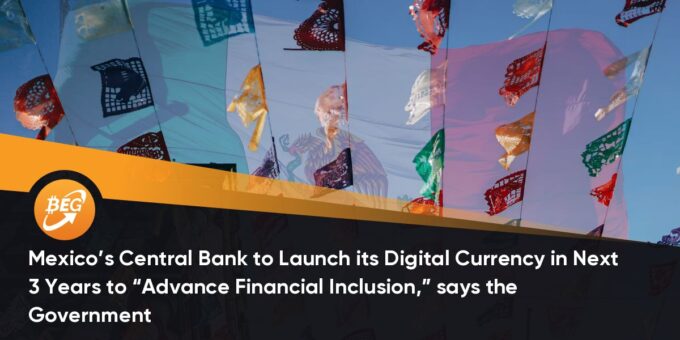 Mexico’s Central Bank to Launch its Digital Currency in Next 3 Years to “Advance Financial Inclusion,” says the Government

The central bank of Mexico will launch its own digital currency by 2024, announced the Mexican government on social media.

“Banxico reports that it will have its own digital currency in circulation by 2024,” the Mexican government wrote on its official Twitter account this week.

In its post, the central bank said it considers these new technologies and the latest payment infrastructure “very important” and “valuable options to advance financial inclusion in the country.”

Banxico, the monetary authority of Mexico, however, hasn’t confirmed the development itself. The central bank is legally independent of Mexico’s government. An anonymous senior bank official also told Reuters that the announcement was “not official.”

A couple of weeks back, Banxico said in a report that it is actually studying and working on the development of a platform for the implementation of a digital currency but gave no details on timing.

This CBDC project aims to improve financial inclusion by opening accounts for the registration of a digital currency for both banked and unbanked people, the report added.

This week, the central bank of India also said that they need to adopt a basic model for its CBDC.

“Given its dynamic impact on macroeconomic policymaking, it is necessary to adopt basic models initially and test comprehensively so that they have minimal impact on monetary policy and the banking system,” the Reserve Bank of India (RBI) said in a report. “India’s progress in payment systems will provide a useful backbone to make a state-of-the-art CBDC available to its citizens and financial institutions,” it added.

The apex bank further said in its report ‘Trend and Progress of Banking in India 2020-21’ that the CBDC can offer myriad benefits such as liquidity, scalability, acceptance, faster settlement, and ease of transactions with anonymity to its users.