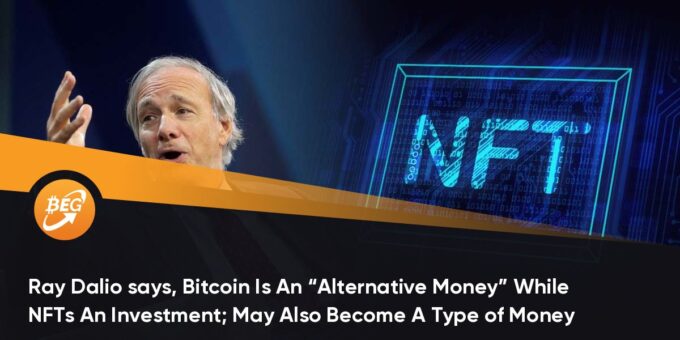 As for Elon Musk putting a literal Dogecoin (DOGE) on the moon, the Bridgewater Associates founder finds it “cute” and wants to know “what’s next.”

Ray Dalio, the founder of Bridgewater Associates, yet again commented on Bitcoin, whose evolution, he said, has influenced changes in his view of it.

Bitcoin has proven itself over this past decade and has not been hacked during the time it has been up and running. Also, it is among the most exciting topics among a lot of people and has “obtained the status of having imputed value,” said Dalio on Lex Fridman’s podcast published over the weekend.

“At the same time it is one of those assets that is an alternative money.”

According to Dalio, who has been against holding cash in the current environment, we’re entering an era where there will be a competition of monies because of the printing of fiat money and the depreciated value.

“There will be a competition of monies and bitcoin is part of that competition.”

There will be different kinds of monies, including those that you buy and sell, such as NFTs, which he said can become a type of money.

“You own it and it’s an investment and you could say I’d rather own it than own bitcoin.”

On being asked if Dalio also owns non-fungible tokens, “not yet,” he replied but said he “definitely want to buy NFTs to just experience them,” and more importantly, produce one.

Further sharing his views on NFTs, Dalio said, “this stuff is happening,” and it “is real.” But as with all new real things, some are going to go. He compared it to the internet in the year 2000, where pets.com could have been great but didn’t make it.

During the podcast, when asked about Elon Musk putting a literal Dogecoin (DOGE) on the moon, Dalio said he finds it “cute” and has “a lot of respect for Elon’s ability” to going to Mars and other things, “I would take that as symbolic and I’d be asking him what’s behind it, what’s next.” DOGE -4.21% Dogecoin / USD DOGEUSD $ 0.18
-$0.01-4.21% Volume 912.81 m Change -$0.01 Open $0.18 Circulating 132.67 b Market Cap 24.15 b 18 h Ray Dalio says, Bitcoin Is An “Alternative Money” While NFTs An Investment; May Also Become A Type of Money 3 d Dogecoin Foundation Working with Ethereum Co-Founder Vitalik for DOGE Staking Proposal 1 w DOGE Sucking Liquidity from Crypto Market Again, Tesla to Accept Dogecoin Again For Merch

Dalio was also in complete agreement with Fridman’s comment on meme coins bringing lightheartedness and humor to this whole thing.

Explaining money, Dalio said it has two purposes: a medium of exchange and a storehold of wealth. Gold, according to him, is one, which is portable and is recognized in other countries.

The precious metal is still his “favorite” in particular because it can’t be traced, unlike bitcoin, which one can trace regarding who owns it, where it’s going, and so on. Dalio doesn’t think bitcoin will serve the types of purposes gold can, and as such, he prefers gold to the cryptocurrency though Bitcoin is “a little bit part of my mix.”

Many in the crypto market expect the leading cryptocurrency to hit $1 million in the future, but Dalio is not among them.

“because the way I look at it is there’s a certain amount of it.”

Using gold as a benchmark, Dalio shared that the bullion is worth about $5 trillion while the total crypto market’s capitalization is $2.5 trillion. While gold is used for jewelry purposes and central banks, keep their reserves in, “I assume bitcoin won’t be used” for these purposes.

Dalio doesn’t believe that Bitcoin would be worth more than gold. “I think that 20% sounds kind of about right,” he added,

“logically it seems to me that there’s a limitation on its price in relationship to other things that are like it.”