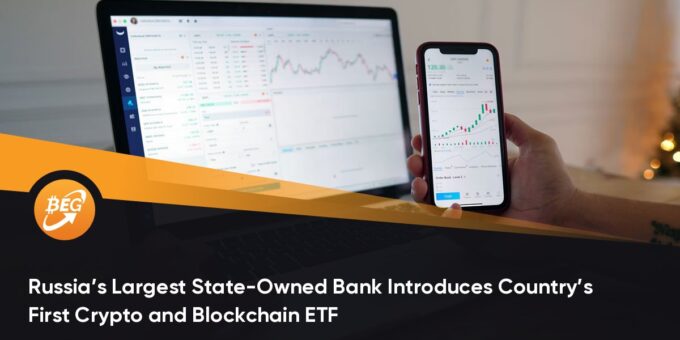 Sberbank, the largest and state-owned Russian bank, has introduced the country’s first exchange-traded fund (ETF) to offer exposure to companies involved in the blockchain industry.

The fund launched by the bank is called Sberbank Blockchain Economy ETF that trades on the Russian stock market under the ticker “SBBE,” Sber Asset Management said in a statement.

Besides these firms, the index also covers crypto and mining companies and firms providing consulting services in the industry.

“There are hardly any people left who have never heard of blockchain,” said Evgeny Zaitsev, General Director of Sberbank Asset Management, noting that direct investments in crypto-assets are associated with high risks; as such, they propose to invest in companies that are involved in the development of blockchain technologies than in crypto assets.

The ETF will give its investors exposure to the “blockchain economy without the difficulties associated with the direct development, purchase, storage, and sale of digital assets,” the company said in a press release.

Meanwhile, Russia’s central bank has been vocal about its stance against crypto, with Governor Elvira Nabiullina saying recently that they don’t want people to invest in crypto. Another official called this a “financial pyramid,” saying in no unclear terms that they have a “negative attitude” towards crypto assets.

The central bank also said that it is looking to ban crypto investments in the country, citing their usage in money laundering and terrorism financing. However, more than $5 billion transactions have been conducted in the country annually, said the Central Bank of Russia in its November report.

Like other countries, Russia is also working on a ruble-backed central bank digital currency (CBDC).