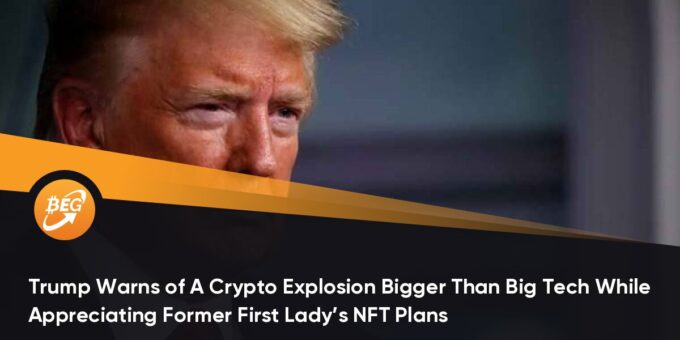 Former US President Donald Trump is now yet again warning about cryptocurrency, calling it “very dangerous.”

In an interview with Fox Business, which was published this week, Trump was asked about his views on crypto as Miami and New York are working on becoming a crypto hub and making it part of their financial systems.

In response, Trump reiterated his anti-crypto stance, saying he only has a love for the US dollar and the only currency he wants is the US and no other.

“Well, I never loved it because I like to have the dollar. I think the currency should be the dollar so I was never a big fan. But it’s spilling up bigger and bigger, and nobody is doing anything about it.”

He further warned that there “could be an explosion someday — the likes of which we’ve never seen” that will make the explosion of the big tech “look like baby stuff. I think it’s a very dangerous thing.”

Back in early June, Trump had called Bitcoin a “scam against the dollar” and said that the reason he doesn’t like digital currencies is that it’s yet another currency competing against the dollar. He said at the time,

“I want the dollar to be the currency of the world.”

Back in 2019, he had also said that he was “not a fan” of crypto assets and that they were “highly volatile.”

“She’s going to do great … She got a great imagination. And people love our former first lady, I can tell you that. They really do, they love her.”

Now for his new social media platform called Truth Social, Trump said, “It’s going to be so big.” He had previously said that this new platform, which is planned to launch early next year, will be an alternative to the current platforms which he said are biased against him.

As for how Truth Social will compete with these tech giants, Trump said, “We have no choice,” only to add, “it’s going to be very big.”