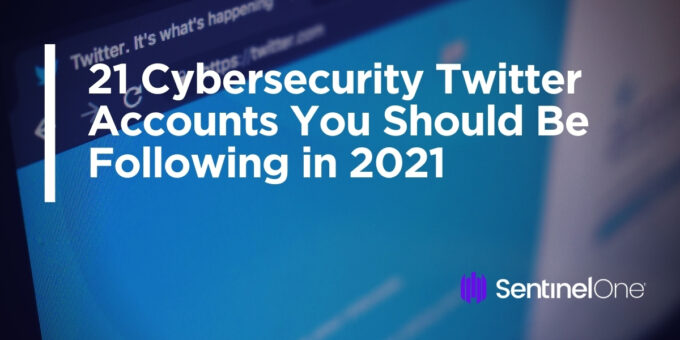 To remain current with the ever-evolving cybersecurity ecosystem, it is essential to have the right sources to keep you on top of the most important malware research, outbreaks, breaches, pentesting, or reverse engineering news. Twitter is where you’ll find experts sharing their insights and, if you haven’t already, soon discover that it is imperative for your career development. Out of thousands of accounts, we’ve hand-picked 21 for 2021 that between them will not only cover the full spectrum of cybersecurity issues but also, thanks to the wonders of retweeting, curate the most important tweets of those they follow. Our list has some well-established rock stars in the field, but you’ll discover some new, interesting and influential people here, too.

Azeria is a security researcher, reverse engineer, founder and CEO of Azeria Labs, and Forbes Person of the Year in Cybersecurity for 2020. IRL known as Maria Markstedter, Azeria was also a Forbes under 30 alum. She is an expert in ARM-based systems and is a thought leader in cybersecurity. @Fox0x01 should be top of your list for 2021.

Runa Sandvik works on digital security for journalists. Her work builds upon experience from her time at The New York Times, Freedom of the Press Foundation, and The Tor Project. She is a board member of the Norwegian Online News Association, and an advisor to The Signals Network. The passion she has for privacy is second to none. Follow @runasand to keep up with the infosec news others miss.

Jason Haddix is a leader in the Bug Bounty community. His Bug Hunter’s Methodology is a must for anyone getting into the Bug Bounty field. His tweets show how much he loves being in the trenches and performing actual assessments. Jason is one of the nicest guys in the industry and is willing to have a conversation with anyone about helping them get better technically. @Jhaddix describes himself as a “Father, hacker, educator, gamer & nerd.” If that’s not enough good reasons for him to be on your list for 2021, we don’t know what is!

SentinelOne’s Cybersecurity Predictions 2021 | What Can We Expect After a Year Like This?

Catalin Cimpanu is a cybersecurity news reporter at ZDNet, where he covers the full breadth of relevant infosec news, whether it’s data breaches, hacking, threat actors or any other related cyber security topic. Catalin’s tweets are always informative and often must reads. @campuscodi covers both offensive and defensive security, and he caters to his followers by delivering actionable intelligence and essential facts that every security expert needs to be up on.

Natalie Silvanovich is a Security Engineer for Google Project Zero, where her work involves breaking things other folks think are unbreakable. In 2019, she found a fully remote vulnerability affecting the iPhone, and this year she’s already presented a webinar at Nullcon on exploiting Android Messengers with WebRTC. Make sure you enable notifications for @natashenka because you do not want to miss anything she tweets.

Zack Whittaker is security editor at TechCrunch and author of the popular this week in security newsletter. As such, Zack is one of the first sources you should look to for breaking cyber and infosec news. @zackwhittaker’s feed is an essential way to keep up with everything that’s going on in the cyber world that could affect your organization, whether it’s in the U.S. or abroad.

Parisa Tabriz is a computer security expert who works for Google as a Director of Engineering. She describes herself as “a browser boss” and “security princess”. She is a thought leader and influencer and had one of the largest ever turnouts for a keynote speaker at Black Hat.  @laparisa regularly tweets and retweets essential content, often related to browser and web security, Google Chrome usage and cyber security tips.

When you talk about who is the next big thing in security, Bill’s name is often the first to be mentioned. Bill is currently an offensive security researcher at Zoom, a sophomore at Rochester Institute of Technology, and has presented at DEF CON twice – and he’s only 19 years old! We recommend that you watch Demystifying Modern Windows Rootkits that Bill presented at DEF CON last year or any of his other fascinating videos and you will quickly understand why @BillDemirkapi made our list of 21 essential Twitter accounts to follow in 2021.

Carlos Perez’s main area of interest is post-exploitation. Carlos considers post-exploitation lacking in many training courses and not sufficiently practiced by many pentesters and security professionals. Aside from being a regular security podcaster and PowerShell MVP, Carlos is also a Metasploit contributor. His @Darkoperator Twitter feed and website are filled with his knowledge and experience, which he loves to share with those looking to learn.

It’s rare for an organization not to have Macs in their fleets these days, and you won’t find a better curator, tweeter and retweeter of the latest macOS security news than Patrick Wardle. Founder of his own open-source software company, organizer of the Apple-focused OBTS security conferences, and currently Principal Security Researcher at Jamf, @patrickwardle’s feed will keep you on top of what’s happening in the macOS security, malware and reverse engineering world.

Binni Shah is a must-follow, especially if you like putting your hands on the keyboard and want to learn the latest techniques of offensive and defensive security. Linux evangelist, Kernel developer and security enthusiast, @binitamshah has provided value with her tweets for years, which is why she has almost 90K followers. Almost everything she tweets is a must-read, so if you’re not one of those 90K yet, you know what to do next!

Since 2013, Gramham Cluley has been working for himself as an independent blogger, podcaster, and public speaker on computer security issues. His tech bio includes work for Sophos and McAfee and he was instrumental in writing an early AntiVirus toolkit for Windows in the 1990s. These days, @gcluley covers a wide-range of cybersecurity news from both his blog and his regular Smashing Security podcast.

If you had to meet one person in the cybersecurity industry, Ryan Naraine should probably be top of your list. Not only is he a thought leader and influencer, he is also very friendly, willing to help, make an introduction or point you in the right direction. Ryan Naraine is a storyteller with more than 20 years of experience in information security. His tweets are informative and timely, and it is recommended your notifications are set up to alert you whenever @ryanaraine tweets.

You can get an indication of how influential John Lambert is from his Twitter bio, which helpfully warns “**BEWARE There are Tech Support Scams that use my name **”. Distinguished Engineer at Microsoft, John has been with the company for over twenty years. He manages the Microsoft Threat Intelligence Center (MSTIC) in the Cloud and AI Division. John has a wealth of knowledge of adversaries and continues to help the cybersecurity community by publishing reports and tweeting about the latest techniques from @JohnLaTwc.

Robert E. Joyce is a cybersecurity official who has served as special assistant to the President and Cybersecurity Coordinator on the U.S. National Security Council. He gave the keynote at 2018 DEF CON and has headed the NSA’s TAO (Tailored Access Operations) unit. Rob was also the person behind getting Ghidra released to the public, which has made a huge impact in the reverse engineering community. In Jan 2021, Rob was named as the NSA’s new cybersecurity director. If APTs and national security threats are on your radar, you want to be following @RGB_Lights.

Eva Galperin is EFF‘s Director of Cybersecurity. Eva’s work is primarily focused on providing privacy and security for vulnerable populations around the world. In April 2019, she convinced anti-virus provider Kaspersky Lab to begin explicitly alerting users of security threats upon detection of stalkerware on the company’s Android product. Eva also asked Apple to allow antivirus applications in its marketplace and, like Kaspersky, to alert its users if their mobile devices have been jailbroken or rooted. Always relevant and often humorous, @evacide is an infosec account not to be missed.

Marcus Carey is co-editor of the Tribe of Hackers series of books offering real-world advice from leading cybersecurity experts on everything from Blue and Red Teaming to C-Suite advice on how to build and manage solid enterprise security teams. Marcus is passionate about creating technology solutions that improve cybersecurity for everyone. His tweets are very helpful and @marcusjcarey is always generous with his time in answering questions on any topic.

Tavis Ormandy is a vulnerability researcher at Google Project Zero. If you are interested in understanding and hunting for vulnerabilities in software, @taviso is a must follow. Find the time to read everything he’s posted on his personal blog as well as on the Project Zero site and you’ll come away both enlightened and enthused, ready to tackle your own projects with the same zeal and dogged determination.

Ariel Herbert-Voss is an adversarial machine learning and security expert. Her work includes demonstrating practical attacks that can undermine privacy considerations in large language models. She is also the co-founder of AI Village at DEF CON. @adversariel is wicked good at what she does and her Twitter feed shows it.

Costin Raiu describes himself as a “Romanian antihacker from another planet”, but it seems while Costin is visiting Earth, he also happens to be director of Global Research and Analysis at Kaspersky. As such, @craiu is a superb source of intel ranging from new zero-day discoveries to retweets from “the best of the rest” covering breaking news in threat intelligence.

Limiting ourselves to just twenty one of the best Twitter accounts to follow during 2021 of course means there’s plenty of Twitter cybercelebs and gurus we couldn’t include. We compiled this list with the help of our own SentinelLabs researchers @MarcoFigueroa and @philofishal, who are also both worth following for relevant content and breaking research on Windows, Linux and macOS topics. Finally, we’d be remiss not to mention that you can keep up with all our news on Twitter, too, by following @SentinelOne and @LabsSentinel.